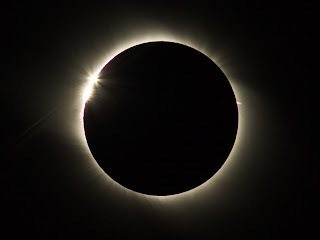 Bring your solar filters and cameras, a Total Solar Eclipse, one of the rarest celestial events on Earth is happening on Wednesday, July 22, 2009! It will be visible between around 8AM and 9AM on that day (at GMT+8hrs, just compute for your own country's time! ;p) in the following countries: India, Nepal, Bangladesh, Bhutan, Myanmar and China. The moon's shadow will then blot out our sun in Japan's Ryukyu Islands before hovering over the Pacific Ocean and eventually disappearing. The solar eclipse will be partially visible for the most of Eastern Asia (including the Philippines! woot! woot!), Indonesia and the Pacific Islands.

In the Philippines, I remember 2 solar eclipses in my lifetime. The first one was the total solar eclipse on March 18, 1988, when I was a young (and innocent, hehe) 6 year old kid (I just turned 6 the week before that!). I remember my mom brought out a basin of water and told us to look at the reflection on the water and not directly at the sun. Some of my neighbors brought discarded film negatives and looked through those.

I did not know about the most recent partial solar eclipse, visible from the Philippines. Apparently there was one last January 29, 2009, but that it was at sunset.

I'll tell them all about syzygies too, and how I was, well, born on a syzygy. :D

Image from here.
Solar eclipses in the Philippines