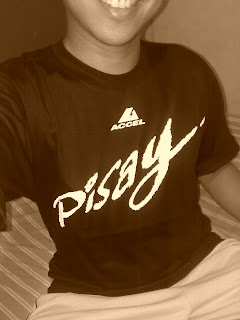 I almost got lost on my way to watch Pisay. My friend Julz Oliveros (not related to Maximo) sent me an SMS saying the showing will be at Cinema 4 of The Block, and that The Block would be "in" SM North EDSA. I had, in my head, planned to just park in the open parking in front of SM North even though it was drizzling a bit. It was the only parking area I could remember...

When I turned right from North Ave, I was dumbfounded! There's a whole new building where the parking lot used to be! Anyhow, I drove (slowly) around the other cars who seem to be as lost as I was, and finally found the Parking Entrance to the SM Annex.

On to the movie then! Pisay is a heartwarming tale of a group of high school students, coming from different backgrounds, but all brilliant, all studying at the Philippine Science High School. What I liked most about the movie was its effective nostalgia. It may be that the movie was set in the 80's (when I was but a wee little baby), but it's theme's captured the essence of being in Pisay. But it's greatest asset may also well be it's worst flaw: It may tend to alienate non-Pisay people. I felt the audience deserved a tad bit more development of the characters. It becomes difficult to sympathize with characters you hardly know.

I loved that the kids acted very naturally, although there were some awkward moments, some dead air, it was forgivable. Dr. Casas was very effective (reminding all of us or a certain Pisay professor we will all sorely miss). The other adult actors, however, (I'm not sure if this was intentional) spoke in a "theater" voice, like a sing-song, Batibot style. I found it unnatural, even highlighted by the fact that the child actors were very natural with theirs ("Egis erp!")

The storyline was flawless. I found it strummed a different chord at every chapter. The freshman year told of a budding relationship ripped apart by a teacher, the sophomore year told of a small town boy kicked-out of Pisay for failing Geometry (and moving on to become #1 in the school he moved to!), the third year featured a girl who had move to The Netherlands because she and her parents were wanted by the government, and finally, the senior year which featured a morally ambiguous research project, a theater loving science school senior, and a terminally ill genius.

I was flooded with memories while I was watching the movie. I was especially moved by the first scene where they found out he got in Pisay. I remember we hadn't received a letter from PSHS yet so my dad decided to go visit Pisay himself to check if I had passed. When he got home, he calmly whispered to me that I had passed, and that was when I started going crazy. Haha! Good times.