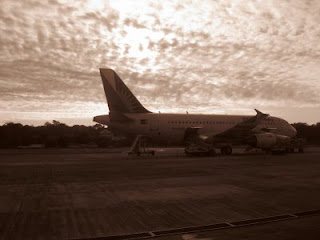 Here are some photos from our trip to Bohol.

The weather was awesome when we arrived. It had been raining for a couple of weeks and the forecast was gloomy, but it was all sunshine and cirrus clouds when we arrived.

We had booked a PAL flight to Tagbilaran via this packaged tour promo, and the flight was scheduled really early in the morning. We had to be at the Centennial Airport at 6AM...

I half-slept through most of the 45 minute flight. Being that I had come from Batangas the night before, I couldn't help myself. When we got to the hotel, as excited as were, we all took a nap. Well, it didn't help that we realized our Bohol Beach Hotel was not actually on a beach, and was in fact on top of a mountain...

It was all worth it anyway, because when we all came to our senses, went down the mountain for lunch at (we went to Bohol to eat at...) Gerry's Grill, we had this for a view. 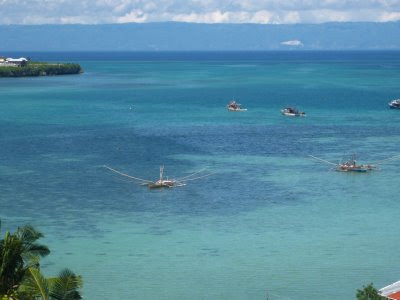 The best freakin' band in Bohol

That evening we swam in the (sigh) ...swimming pool... and had dinner at the hotel. They had a band who, lucky for them I do not know their name, who was horrible completely horrible horrible horrible. Their frontman couldn't sing if his life depended on it. I really cannot comprehend WHY oh WHY he has being paid to sing for us... :p ok moving on...

Here is a photo of our whole party, at the lobby of the hotel, right before we left for our day tour. 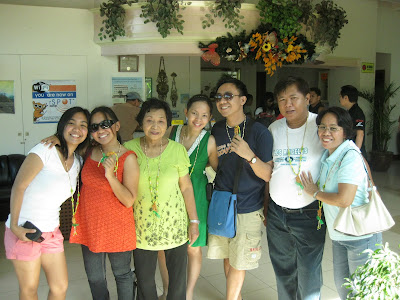 We first went to the Blood Compact site where they built a sculpture depicting the ceremony. Sikatuna was curiously wearing something that looks like a Spaniard's hat and a cape.

Then we were off to see the hills, the Chocolates ones. It was quite a long way from where we were staying, around almost an hour. We went to one of the tallest hills that they turned into a viewing deck.

There were stairs (214 steps!) going straight up to the top of the hill where you can take awesome photos. It was unbelievable how the course of time, the motion of the earth, the waters, the climate changes and all that, created this unique land formation that is the Chocolate Hills. :D 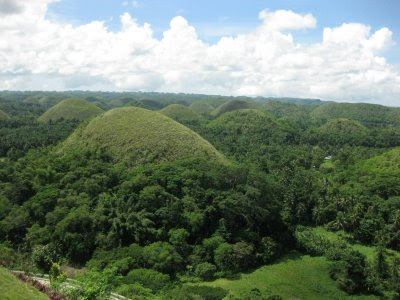 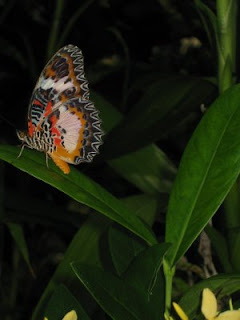 After an energizing hill climbing, we were off to the Butterfly Farm where they showed us the differences between butterflies and moths (did u know that a Mariposa is a moth?) They have us caterpillars to hold (they don't itch, moth larvae do). And I got to take this lovely photo of a butterfly.
After that we had lunch on a boat on the Loboc River, and we stopped to watch a group of young boys and girls singing "Oh Carol!" and a bunch of other songs. My sisters and I took guitars and jammed with them a little bit.

And then our good fortune with the weather gave out. The weatherman's predictions came down hard on our boat's roof, but luckily the winds were not too strong. We made a u-turn on the riverbend and went back to land to go visit the Tarsiers.

The Tarsiers were uber cute, they can fit in your palm but they have eyes the size of the circle you can make with your thumb and forefinger. We were not allowed to touch them so I'm not posting any photos. (hehe..)

After that we went to one of the oldest churches in the Philippines, which I forgot the name of, but there was this really amazing sculpture of Jesus made out of 1 whole piece of wood (usually they are done in parts and then connected).

After that, we went back to the hotel. Had dinner and a foot massage, and retired early.
We had a early start the next day, we were going to go dolphin watching! I was excited because I had this dolphin phase when I was in high school where I wanted all these dolphin stuff. I eventually got over it, but my fascination of dolphins remained.


Hundreds of Dolphins followed us!

So we got to the dophin site at around 7am. It started a bit slow, we were trying to call the dolphins first in English, then we thought maybe they only understood Tagalog, then we tried Visayan and then started saying "gani! gani!" in Dori-style whale calling... 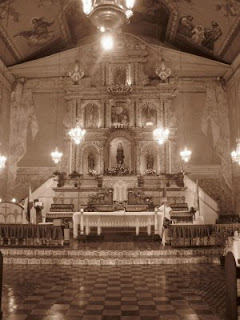 And then they came! Tens! Maybe even over a hundred dolphins were there! They swam beside our boat (we were the only boat there!) and they were jumping out of the water. It was so completely wonderful, even the boatmen were talking photos. They said the dolphins have been scared of boats ever since they started hunting dolphins for food. But they also said that its now illegal to hunt for dolphins there.

I said they probably sensed that we meant them no harm. ;) The dolphins left and returned for about 3 or 4 times until it was time for us to go to the beach for breakfast. We went snorkeling (I found Nemo!) and then had our lunch at around 12nn, and by 1pm we were off to the mainland.

The flight home was also quite memorable, but not in a good way. The rains luckily did not spoil our visit with the dolphins, but it was waiting for us in Manila. :p The extended turbulent flight was made even more terrifying when, on our final approach towards the landing strip, our plane suddenly pulled up again. We were later informed that there was a plane still on the runway and that we needed to go around and land again.

When we finally touched down, everyone was so relieved that they clapped their hands before they turned their cellphones on.

All in all, the Bohol trip was really fun, filled with memories of the river boat lunch, the amazing Chocolate hills and the uber cute Tarsier. But most of all, it was awesome that I got to spend quality time with my family and my gal. :D