What would you do if a Zombie attacked you right now?

So I watched the whole Season 1 of AMC's "The Walking Dead" last Saturday (until about 4am the following day) and have been thinking about zombies for a week now. No nightmares so far, but my thoughts have, of late been returning to zombie attacks and possible escape routes. I mean, will we be able to tell when a zombie will attack? Heck no! So we should be prepared right? Right? :p

What would I do if the walking dead suddenly attacks me right here, right now, while doing some random thing?

What to do if a zombie attacks you while you're jogging

I was jogging the other day. It was evening and the curb I needed to take was dark because the lampost oddly flickered off whenever a car passed by. I wondered, what would I do if a Zombie suddenly attacked me right here, right now, while doing some random thing like jogging? Hmmm....

I have a few options.
(1) Run inside the first house I see and lock the doors and windows then hide inside a bathroom or climb into the ceiling (but there may be rats there. eww...), or...
(2) climb a coconut tree and use the coconuts to defend myself in case one of them zombies knew how to climb, which I doubt, or...
(3) continue running - but seeing that I've been running before that, I might not have enough energy to run away from all the zombies. (Yes, I've really put a lot of thought into this!) 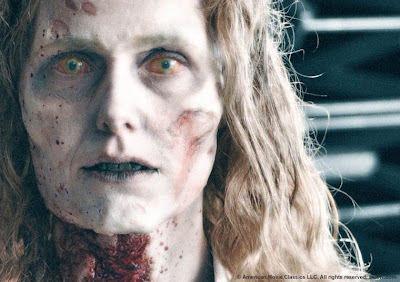 What if a zombie attacks you while you are washing the dishes?  Or watching American Idol? Or writing a blog post? Or buying groceries? Or ...

What if the walking dead suddenly attacks you while you're washing the dishes? Right through the window in front of you, its arms reach instinctively for you. Should you splash the zombie with water? Throw plates at it? Or just bolt up the stairs and up on the roof where they can't reach you?

What if you were in a movie house watching some horror flick like "The Rite"? Would you run up the screen? Throw your popcorn at the zombies?

What if you were in the spa enjoying a relaxing steam bath when you start smelling blood and realize the guy who just entered didn't have a towel on and was hungry for flesh?

What if you were having dinner at a fancy restaurant? Would you throw your Php 5,000.00 steak at the zombies and pray it was rare enough for them to mistake it for real fresh meat?

Argh! So many situations, so many scenarios, how to survive an apocalyptic zombie invasion - that remains to be the question....

When does The Walking Dead Season 2 begin anyway?