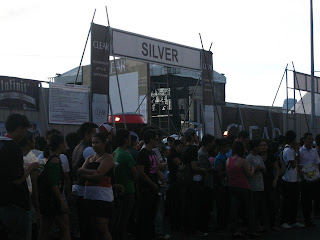 On June 11, Liz, Bing and I went to the Mall of Asia concert grounds to see us some dolls: some Pussycat Dolls.

We had scored some discounted tickets c/o Clear shampoo, went on leaves from work, rocked sexy outfits (the ladies only hehe) and made our way, (the first time for me) to the Mall of Asia. We didn't have a hard time finding it at all, it's kind of hard to miss with that huge globe. Anyway, if you need directions, just leave a comment, I give OC directions. Haha.

Anyway, we arrived at around 5 in the afternoon, already a bit late from the 3pm we originally planned. Luckily, a lot of people also had the same idea as most of them arrived at 7pm!

Not to say that there weren't a lot of people already. There were several lines already beside the entrances, one for VIP, 1 for Gold, 2 lines for Silver and one major line for Bronze. I was actually beginning to get pissed because the lines were so disorganized and the guards and the bouncers were doing nothing to organize the lot. When we were about to enter, there was this one guard who was making us separate into a line for males and a line for females. I'm like, we'll we've lined up "mixed" and nobody was organizing so don't start organizing just when we're about to enter the gates! :p Good thing Liz was there to stop me from going ballistic on the poor dude.

Anyhow, I also didn't have time to do my litany because they were letting us in already, it was just before 6pm then. We got in, picked a good spot, then I went to get us some snacks, there was Itallianis, Fish & Co. and other stalls offering finger-snacks.

I forgot to mention that this concert was the first ever concert that I watched. Unfortunately, it kind of traumatized me enough to not want to watch another concert in the near future... here's why... 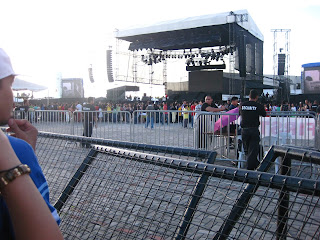 We got a good place to stand, right at the barricade for "Silver", a bit on the right side, but there were no chairs, so we were standing there the whole time, being squished by people from all sides.

QYORK and the Philippine All Stars were the front act (we thought it would be Lady Gaga). They were fine, except for that one guy singing the melody, or some sort of melody which I couldn't really understand. They were a bit boring. :p The Philippine Allstars, I was already a fan of, so I enjoyed their bit even though I couldn't really see any dance moves from that far away. It was then that I realized that I wasn't going to enjoy the concert at all. We were not the farthest from the stage, but we were far enough. The PCD would be just as big as grasshoppers (not ants hehe), and we won't be able to see their sexy dance moves. Damn it. :p

At around 9PM, the Pussycat Dolls went onstage (mind you, we've already been standing for over 3 hours by then!) and they were awesome. There was one missing Doll, red-haired Jessica was in the US because of a dancing injury, but the rest of them were there in high adrenaline and giving a great show. 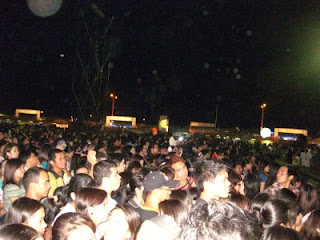 They sang all their hits: Don't Cha, When I Grow Up, Stick Wit You, Buttons, Beep, and loads more. I was trying my best to enjoy the concert ('coz we did pay for it right?), I tried to move with the music but couldn't because I was being squished by everyone from all sides. I was behind Liz, and we were just swaying a little bit to what the space allowed us to sway.

But the worst part of it really for me was this girl who was right behind me, singing to every song... OUT OF TUNE. I mean, c'mon, it's great that you know all their songs, and it's okay to sing because it's fun, but SHOUTING in my ear is not fun for me at all. And this went on for the WHOLE duration of the concert. She did not miss one note, not one.

On the other end, the BEST part of the show for me was the part when part-Filipino, part-German, part-Hawaiian, American Nicole Scherzinger, lead Pussycat Doll, said in a sort of teary-eyed, i-feel-a-lump-in-my-throat way, "I'm really proud to be... to be... ... Filipina.." which of course elicited cheers from the throng. It was so dramatic it was kind of hard to watch. Haha! Nevertheless, we are proud of you Nicole! We really are!

Just makes you wonder though, does she also say that when she's in Germany? heh heh heh...

After all of that was over, we were so tired we didn't even stay to watch the fireworks display. We went straight to the hotdog stand, then to the toilet, then to the car and to bed. lol.

Might be a while before I go to watch another open air concert.