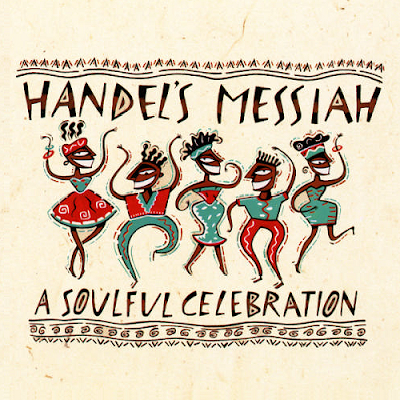 This has got to be one of my favorite albums of all time: "Handel's Messiah: A Soulful Celebration" release in 1992 and executive produced by Norman Miller, Gail Hamilton and Mervyn Warren, is a reinterpretation of the 1741 oratorio "Messiah" by George Frideric Handel - yes it is a famous classical piece usually sung during Christmastime - but was transformed into an extraordinary mix of African-American music including spirituals, blues, ragtime, big band, jazz fusion, R&B and hip hop. The result, pure joy in music.  The album received the 1992 Grammy Award for Best Contemporary Soul Gospel Album.

I've had the privilege to sing the original Handel's Messiah many times during my days in the choir, and I've also had the privilege to perform the "Hallelujah" from the above-mentioned album - complete with choreography! I'd like now to share with you what I mean, in case this is your first time to hear about it - and if not, I invite you to listen in to these selections from the 2 beautiful pieces of music...

"For Unto Us a Child is Born"

This is one of my favorite songs in the whole oratorio (gets you in the Christmas mood eh?), and probably the hardest to sing really well because of all the runs. This version was performed by the Cantillation Choir, with the Orchestra of the Antipodes, conducted by Antony Walker.


This is the version from "A Soulful Celebration" arranged and produced by Gary Hines, and performed by Sounds of Blackness.


"And He Shall Purify"

Here is the original Handel's "And He Shall Purify" performed by the Choir of King's College, Cambridge Academy of Ancient Music with Conductor, Stephen Cleobury.


This is the reimagined version. Arranged by Michael O. Jackson and Mervyn Warren, Produced by Mervyn Warren, and performed by Tramaine Hawkins (live with the Mt. Rubidoux Seventh-day Adventist Church in Riverside California)...