Our Valentine weekend was really HOT! 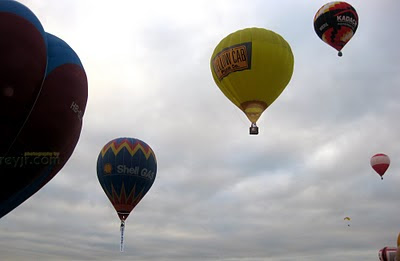 We were up bright and early on that sunny Valentines Day morning as we made our way through the streets of Clark Air Base. We had stayed at Hotel Stotsenberg for the evening after Duty Free Shopping and dinner at a grill and wine restaurant.  We got lost several times while looking for a dinner place there, and so we read the directions to the Fiesta venue carefully.  Thankfully we did not get lost again!
As we finally entered open area after a long queue, we saw the still under-inflated balloons in a distance. Liz and I excitedly looked for a good photo spot amidst the huge throng of people...

A few moments later, the Philippine National Anthem was played loudly on the speakers and a group of 3 people parachuted, one of them was carrying the Philippine flag. What a glorious sight to behold...

Right after that, a band began to play and children in bird costumes began their dance program. Unfortunately for us, we couldn't really see the kids perform because there we so many people. Seriously, there were more than 5,000 in attendance!


They're full of hot air!

As I jealously took note of everyone else's DSLR cameras (haha), I snapped some photos of the hot air balloons being inflated.  You could hear the loud blast of fire into the mouths of the balloons as they slowly began to inflate...


The most remarkable of the hot air balloons were those not of the typical spherical form - there was a sun complete with rays, a turtle, a beer bottle and even a barn with cows!

Walking around we saw some souvenir items, shirts and hats, a real Yellow Cab, big motorbikes, small aircrafts, and a lot of people flying a lot of kites. We cooled off by eating Chowking HaloHalo and SnowCones. 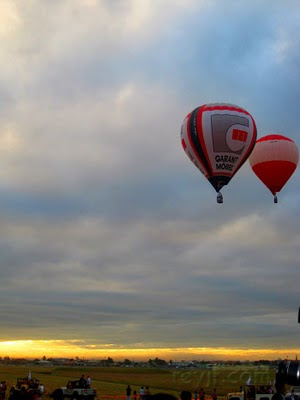 At around 3pm, they did the disappointing Valentine's drop. We were expecting they would shower the 5000+ people there with roses or chocolates and candies, but what we got instead was one short blast of something like 10 packages - I have no idea what was inside. :p

By then the heat had become too much for Liz and so we decided to head back home to Manila.  We had our fill of fun in the sun - it was definitely a hot and awesome Valentine's Day.


Travel Tips for those attending the Hot Air Balloon Festival

Some parting tips for those planning to go to a Hot Air Balloon Fiesta:
And finally, proof that I was there too. ;)

You can click on the photos to view them in full size.
All photos were taken using my Canon Ixus 90IS point and shoot camera. :)