Here is a back post I should have published a month ago but wasn't able to. It is part of my Living Batangueño series. 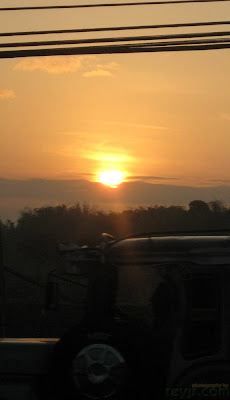 I was in Batangas during the Palm Sunday weekend this year and attended the 6AM mass at the Santissima Trinidad Parish (the one beside the SM Batangas Mall).

Here are some of my favorite photographs from that day. You can click on the photos to see them full sized.

I'm not used to waking up early, but I did that day. I'm not sure why. My whole life I've only been to a Palm Sunday mass maybe less than 5 times - or at least that's how many I remember....

My friend Dom and I went ahead and bought ourselves our "palaspas". It was a glorious sight to see all of them green palm fronds together, not unlike seeing Christmas Trees at Christmastime. I got a simple one for a few pesos, and noticed they actually came in different designs - some more complicated than others. 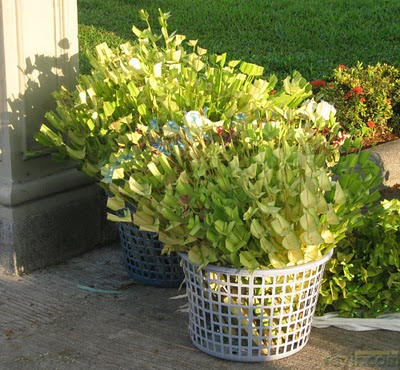 We arrived to an already big crowd of people beside the road near the Shell gas station. The big group tried to listen to the priest's sermon despite the occasional jeepneys and the blaring campaign jingles of local candidates.

Being a former choirboy myself, I was pleasantly surprised at the small choir singing while sharing one microphone. Haha. The show must go on, make it work with one mic. Haha.

The priest, wearing a traditional red cape, walked around with his incense and Holy Water to bless the people and the palm fronds. The ceremony was very orderly, almost solemn. 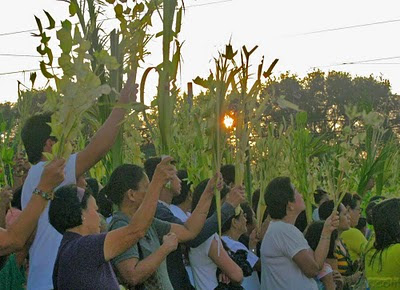 The people lifted their palm leaves or "palaspas" and waved them in the air for the blessings from God. 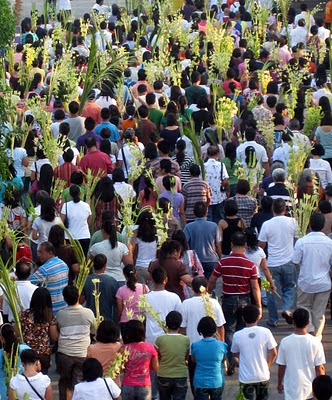 After the ceremony, there was a short procession going from the corner of the street going back to the church. We had to run up the overpass to get this shot. :p From here you can see how many different palaspas styles there were. 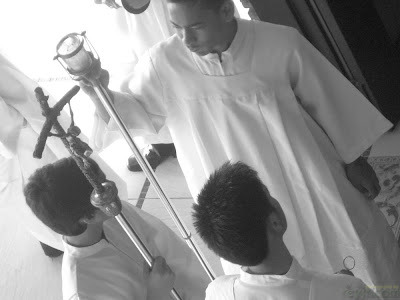 Finally, here's a photo of light moment shared by the altar boys right before the mass begun.  Soon after this, the costumed characters of the traditional "mini play" during the mass entered with the priest.

I was never an altar boy, but was a reader/lector and commentator for the Saturday "Children's Mass" when I was in grade school. There was one time, though, that they had this big play for the Lenten season in our local church...

I distinctly remember auditioning for the church presentation at Lent when I was around 11 or 12. I was so convincing (lol) they wrote my part in. I played a street urchin who had only a few lines spoken repeatedly but in full drama (with real tears!).

In the beginning I would only declare events (as if people didn't already know!), I would shout about Jesus Christ's trial and then would eventually get lost in the crowd. When they announce Jesus' crucifixion I was devastated - while everyone else heckled and booed, I, like a nagging child, tried to convince everyone, including the audience that Jesus is the Son of God.

Later on, after the crucifixion, I would cry at the foot of the cross with Mama Mary (with real tears!)

I remember it was a very emotional, very draining show. But that it really tickled my interest to the world of theater. I would go on to participate in a few more plays while I was in the University. I also auditioned for a couple of professional gigs but never really got my "big break" hehe. That's why I describe myself in my profile as a "frustrated thespian".  =D