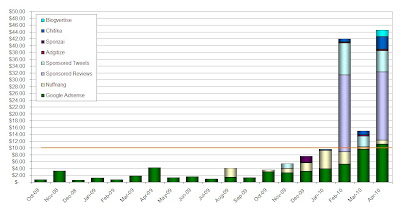 But for the third month in a row, I've surpassed by $10 per month target in the heels of my joining a news website, plus new opportunities from Sponsored Reviews.

Oh, and Blogvertise finally paid me my $2! woot...

Google Adsense - With the $11.08 earned this month from Google Adsense, I am beginning to see the potential benefits of SEO. I have tried optimizing my most read posts firsts in the attempt to keep them on the first page of Google Search, or if possible, to make them rank higher. Ok, so I said "beginning" - haha, not there yet, but as @marghil said during the last iBlog6 summit: "Be patient!"

Another contributing factor to my increasing Adsense earnings - I am now a contributor to a news blog, and am feeling very "journalistic" about it. Haha! I see awesome potential from this new venture and hope to cultivate it further as I learn more.

With these 2 combined, I hope to receive my first Google Adsense paycheck by October 2010 (maybe even earlier!). woot! It took me all of two years! Haha! Hopefully the second one won't take as long. :D

Sponsored Tweets - The problem remains, I only get 1 or 2 click from the new shortened links when I used to get up to 10 with bit.ly.  It's dismal - I'm actually surprised they're still giving me opps. But I am guessing their premise is the more people see the new shortened links, the more inclined they are to click them. I earned $6.00 from Sponsored Tweets this month, plus $0.25 from referrals. That makes a total of $20.21 in 6 months.


Nuffnang.com.ph - This service earned me $1.18 or Php57.49 this month, not a lot, but they are still worth joining because of all their events, contests and freebies. I have so far accumulated $18.15 in 9 months.


Adgitize - It's my fault, I still have not been very active on this service and so it only got me $0.36 this month. That totals to $1.05 in 3 months. :p Thinking of dropping this now since I cannot attend to it anyway.


Chitika - I opened Adgitize and Chitika on the same day - and the difference is obvious. I earned $3.70 on Chitika this month, which totals to $6.24 since I began in January. It's catching up, and in the succeeding months, hopefully it will be at par with Adsense or at least at 80%.  Haha.

Blogsvertise - The $2.00 have been paid out to me, finally! I am still on probation status on this service - I have no idea why because my blog is not less than 90 days old nor am I lacking in new content. I don't know. :p

I have sent a request to Blog4Reviews.com and ReviewMe.com but have not heard from them so far. Sponzai and PayPerPost, I am still waiting for an opp to come by. :p 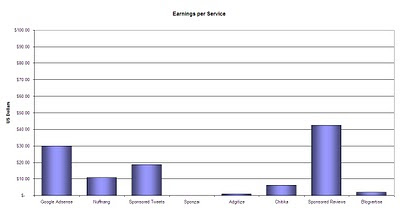 How have I performed in the past months? Read:

It is a journey, learning how to make money online, one that requires patience - a lot of patience. And as with any "job" you need to work hard for it.  Don't for one second think that this so called "passive" income did not require long hours of tweaking and optimizing, and yes - you  need your brain for this too. :p

Another thing you need is inspiration. Inspiration may be simply your desire to earn money. Or whatever else from your family to your dog. If you run a personal blog like I do, you have to set limits -you wouldn't want to bombard your readers with sponsored posts lest they would feel taken for granted. :)

How did you fare on your online money makers this month? (Much more than me, I hope, haha!) If not, then just keep trying and we'll get there!