The Beginning of an Addiction: Coffee

Disclaimer: I am not a medical professional nor have I have taken any tests that prove that I am suffering from any psychological disorders.


This post is in response to a really cool website featured a few days ago on "Blogs of Note" called Coffee Messiah. It was all about, well...coffee. :D 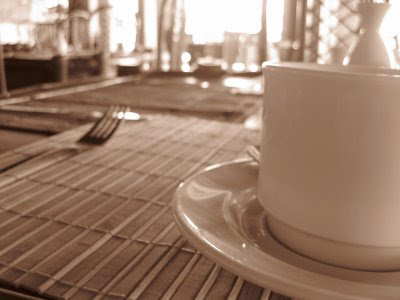 I started drinking coffee about 9 years ago. My first cup of espresso was on the dinner table of the Pizzocherro house in Cascine San Pietro, Italy. I didn't like the strong bitter flavor at first so the next time they offered I took some cappucino instead. Italians love their coffee almost as much as their wine, so every meal we had ended with a "Cafe?" from Mama Ornella...

By the time we were to leave Italy I was hooked. To Manila I brought home a Moka (espresso maker) and bags of Italian coffee. After I've gone through those I went for Starbucks. :p When Starbucks began giving those planners for Christmas, I would usually get at least 2 - and that translates to how much coffee I've consumed!

In the years that have passed though, my coffe addiction has waned. I've had lesser and lesser coffee for health reasons (acid!), as well as financial reasons (recession!). Starbucks isn't getting cheaper.

So I've kicked the habit, save for a few months ago when I "rediscovered" coffee and learned to enjoy it in a different way (pressed coffee!). My dad, also a coffee drinker, wants to buy a coffee press now.

But coffee, like shampoo or underwear, will always be a part of my life. I probably will be drinking coffee until the acid burns a hole in my stomach and I can't drink it anymore, then I'd have to take it intravenously. xp


Read my old post about Coffee addiction on Xanga waaay back in 2006 here.