on August 12, 2009
I just found out that there is an ongoing meteor shower called the Perseid Meteor Shower, and that it is peaking TONIGHT (Aug 12)! It's a great night to sit under the stars and wish on a shooting star (or a hundred shooting stars just to be sure). :D

So, tonight, get you boyfriend, your girlfriend, your special someone to spend a few minutes looking at the sky. Make sure it's dark to get a better view of the night sky. I guess, a candle-lit dinner will be perfect. ;)

Details of meteor shower, where to look, i.e. what constellations to look for, and other geeky stuff after the jump... 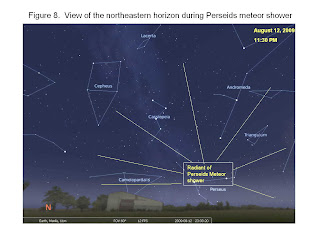 Here is the info excerpt from the PAGASA Website:

"The famous Perseids meteor shower will be observed with its peak on the late night of August 12 until dawn on the following day...occasionally, an exceptional shower may show tens or even hundreds of meteors per minute, but around 50 meteors per hour is more typical."

The Perseids meteor shower is the most reliable one, which is best seen during August 10-14 every year. Under most favorable clear sky condition, there may be 60 to 100 meteors per hour."


If you see a shooting star, what will you wish for?