Last November, I posted my first celebrity photo on Reyjr.com featuring Pop Princess, Sarah Geronimo. Now, moving over to the rival network, here is the lady "dubbed as the country's "R&B Princess" and "Soul Princess" in a "vintage" photo with me (haha - circa 2005) - Melanie Hernandez Calumpad, or the singer more commonly known as... 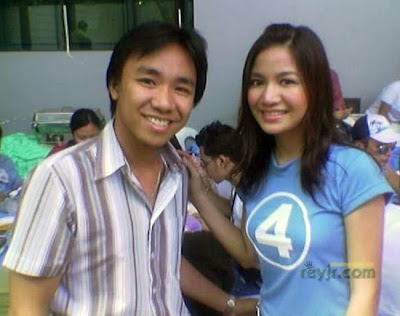 Them artists without a surname

Accordingly to wiki, Kyla is the only female Filipino artist who has won the MTV's Southeast Asian Viewers Choice Award. The only other two local artists to have won are OPM bands Parokya ni Edgar and my former schoolmates, The Eraserheads.

Most recently, Kyla was cited as the Viewers’ Choice for Favorite Mellow Video for "Old Friend" and Favorite Song for "Back In Time", a duet with Jay-R, at the 2010 Myx Video Music Awards,

The Story behind the Photo

I had friends visiting from the California who were able to score passes for us to watch the now defunct Sunday noontime show on GMA 7, SOP. We sat a few rows away from the stage and were made to clap and cheer on cue (lol).

I don't remember much about the show, but still have some photos with singer Jay-R, Aiza, Ogie Alcasid and Dennis Trillo. :p Some for a later post.

The new show on GMA 7's Sunday noontime slot will be "Party Pilipinas" - hosted by basically the same folks as SOP. :p I hardly watch television nowadays, and would rather spend my Sunday noontime having a barbecue with my loved ones in the backyard.

How about you, will you be watching?