This post is covered by a Creative Commons License.

Reyjr.com has been following Filipino singer and International Pop Star Charice Pempengco's performance on the Billboard Charts, and so it comes as a pleasant surprise (albeit already half expected) that Charice will be joining the Second Season of Glee.

Several weeks ago, a false report came out that Charice was to join Glee. She, her mom, and her US Manager Marc Johnston denied it vehemently, saying Charice's Philippine Manager might have been "confused". This time around though, it came straight from the Johnston's mouth...


Entertainment Weekly reports that Charice is set to join the Glee kids in a recurring role as a foreign exchange student next season, for real. Of course, it will come as no surprise that she will be pitted against New Directions' resident female lead, Lea Michele's Rachel Berry. I foresee a sing-off - but on what song? Hmm... 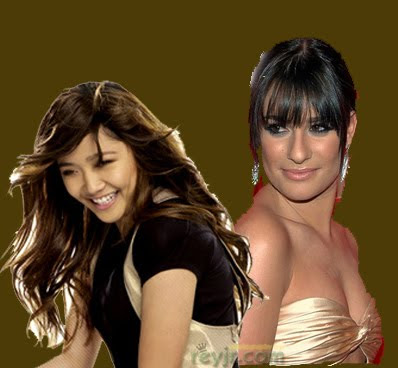 While Lea Michele, being foremost a stage actress, leans more towards Broadway-type songs, Charice's voice is more pop-ballad. What would be interesting for me would be how they would portray Charice in the show.

Of course they will have to take into consideration Charice's image. I suspect they won't allow her to be portrayed as the evil exchange student from Asia. Hehe.

There's also a mention that one of the Glee kids will take interest in Charice's character in the show. My guess would, of course, be Finn. His character was attracted to Rachel Berry's talent, so that might be the angle they will take.

In any case, Charice's addition to the international hit TV show is another milestone for Charice and for all Filipinos.  Way to go!

What should Charice's Glee character's be? I am thinking something Filipino - like "Mayumi" or "Maria". What do you think?


Photo of Lea Michele by David Shank. Photo of Charice from Google. :p