If it's your first time reading this post series, let me explain briefly - I've decided to blog my journey of Earning Money Online - with a monthly update, a target amount, charts, the whole shebang. (Hehe.)

As a disclaimer, I will say this series is meant to share my experiences in this venture - but mine is a personal blog that does not receive a whole lot of traffic, I do not have a lot of time to blog, but do want to earn a little bit from it. If you are in the same situation, I invite you to share what you know and how your efforts have been fruitful. If you are a newbie like me, then read on and join me on this journey! 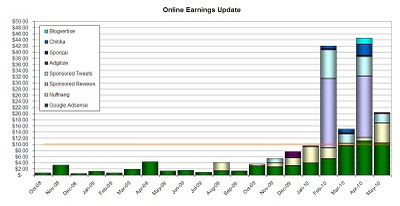 It has become apparent that I will probably be earning more than my target $10 per month every month until the end of the year. My Adsense earnings have been growing (albeit slowly) in the past 5 months or so - and this month, for the second month in a row, it actually earned enough to cover my target $10. That means all other services are revenue. :p Awesome!

The question now is, is this growth sustainable? That remains to be seen. See how much I earned online this month...

Google Adsense - $10.41 - The Philippine Elections and Jejemons helped to increase my blog traffic and earnings on Adsense this month.

I had a difficult time accessing PPCRV and the Comelec website during the elections and so I contented myself with looking at PPCRV Twitter updates. I found it was a bit difficult to read from Twitter and so I transferred them to a blogpost. Turns out a lot of people were interested in that.

I find it ironic that my "Learn How to Jejemon write" post is one of the Top Search Engine results for this keyword. I mean I am hardly a Jejemon and would even readily join the Jejebusters army. Hehehe. :p But I guess Google doesn't discriminate. Go ahead and search for "Learn Jejemon" on Google.

Nuffnang.com.ph - Php312.39 (roughly $7.00) -It was a good month for Nuffnang, I had around 5 ads in rotation in May. I also wanted to join several contests but just couldn't get around to it because I was busy with my real life job. :p

Chitika - $0.05 - Five cents?!?! Lol. But no worries, Chitika is upgrading their configuration and their ads. Reyjr.com was "Pending review" for most of May, but was finally (finally!) approved in the last week or so.  With these changes I am hoping to get more revenue from Chitika in the months to come! Fingers crossed!


Adgitize -$0.30 - Erm. Yes well, I still have not been very active here, hence the minimal returns. What else can I say? :p I'm probably giving them a bad rep, sorry. I am certain this ad service works very well for those who actively use it. There. :) 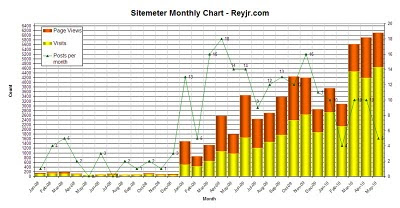 This year though, in the first 5 months of 2010, my average monthly blog traffic increased by 136% compared to 2009 - BUT my posting frequency decreased by almost 40%!

My conclusions are (1) the more blog posts you have, the more traffic you get in the long run - so it would be good to have a few perennially visited blog posts, and (2) it's not always about the number of posts so much as the content. If you write a blog post with good content, it will be visited again and again even years from when you first published it. :)


*****
I do hope my blog continues to grow as I have bigger dreams for it. Hopefully when the income from blogging becomes stable, I can set up a one-time Scholarship grant, or help sponsor a Choral festival. That would be tremendous. :) For now though, I'll keep on trying my best.

How about you? What are your dreams for your blog?