Please take this with a grain of salt. I have no intentions of campaigning for anyone here - I just found it interesting to share. See, Google trends would probably also translate to popularity among a certain demographic - Pinoy Google Users. :p 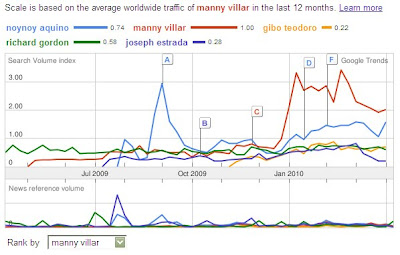 Sen. Manny Villar leads the pack by a wide margin - notice how his Google searches surged in January 2010?  It's when he revved up his campaign with "Akala Mo" and his viral theme song that begins... "Nakaligo ka na ba sa dagat ng basura?" Any marketer's dream haha! In March, his searches dropped off very steeply but remained at the top of the heap.

As a relative comparison, giving Manny Villar 1.0, 2nd placer Sen. NoyNoy Aquino gets 0.74. Notice where NoyNoy's Google searches peak (marked by the letter A) - it was in September 2009, when NoyNoy announced his intentions to run for President. The smaller peak before that was in August when his mother, the late President Cory Aquino, died. He remained high in the searches but was not able to catch up to Villar's Google glory.

It could be because searches for him were divided between Richard Gordon and Dick Gordon, 3rd placer with 0.58 - even though in the last week or so of March, he was overcome in Google searches by Sec. Gilbert Teodoro, Gordon had been in Google searches much earlier than any of the Presidential candidates this year (yes, even Erap). Gordon was already trending on Google since mid-2005 vs Erap who began trending in mid-2006.

Pres. Erap Estrada is 4th with 0.28 rating in the past 12 months.
Interestingly, at the end of February, Erap was third most searched of the group, but in the past month, his searches have slipped dramatically. Come to think of it, I have hardly heard anything about him - it's almost as if he had stopped campaigning altogether. Hmm...

Another Presidentiable with two versions of his name - Gibo Teodoro and Gilbert Teodoro, the former trends higher.  He scored the lowest Google searches in the past 12 months - mainly because he began trending only in November 2009. At the end of March 2010, he is third highest in Google searches among the five Presidentiables. I do not see any surges in his Google trend searches though, even when he was declared the Administration candidate.

Last month before the May 2010 Philippine Elections

It is the final days of the campaign. The heat is on - with all the antics and black propaganda being thrown around. It makes it more difficult to decide who to vote for. I find myself still undecided despite the fact that I've already laid down my criteria on how I will choose my next President.

What about you, have you decided who you will vote for?